The battery-operated OptiSanXTProis the 3rd generation of a widely used handy device for the professional use of light and colour.

What was taken for granted by the ancient Egyptians and Greeks, and was often dismissed as "esoteric humbug" in modern times, has long been scientifically proven: the health-promoting effects of light and colours.

The literature on this subject contains many examples of physiological effects that can be achieved with different intensities of light. However, findings from biophysical principles show that not only the colour nuance and intensity of the emitted light, but especially the frequency and rhythm of the light pulses can have an impact. From experiments with biophotons, one can draw the conclusion that not the persistent radiation, but on the contrary, a rhythmically interrupted application of light shows faster results. Alexander Gurwitsch, for example, demonstrated this on living organisms as early as the 1920s.

Each programme with ideal conditions

OptiSanXTPro contains ten different types of LEDs, those alone can generate a wide range of visible light and part of the infrared light.

During the development of the programmes, special attention and care were given to known basic principles for the calculation of rhythms, individual light intensities and their combinations.

During the course of a programme, individual colours are controlled, and by combining the intensity of red, green, blue, an extraordinarily large number of visible colour nuances can results.

Some of the LEDs can emit certain colours with increased intensity, and the built-in microprocessor controls hundreds of rhythm variations. As a result, the LEDs emit the most diverse variations of light pulses.

The results are combinations of:

The operation is very simple. The programmes have a preset running time that can be interrupted at any time, just as the general light intensity can be reduced for each programme if desired.

History of the OptiSan product range 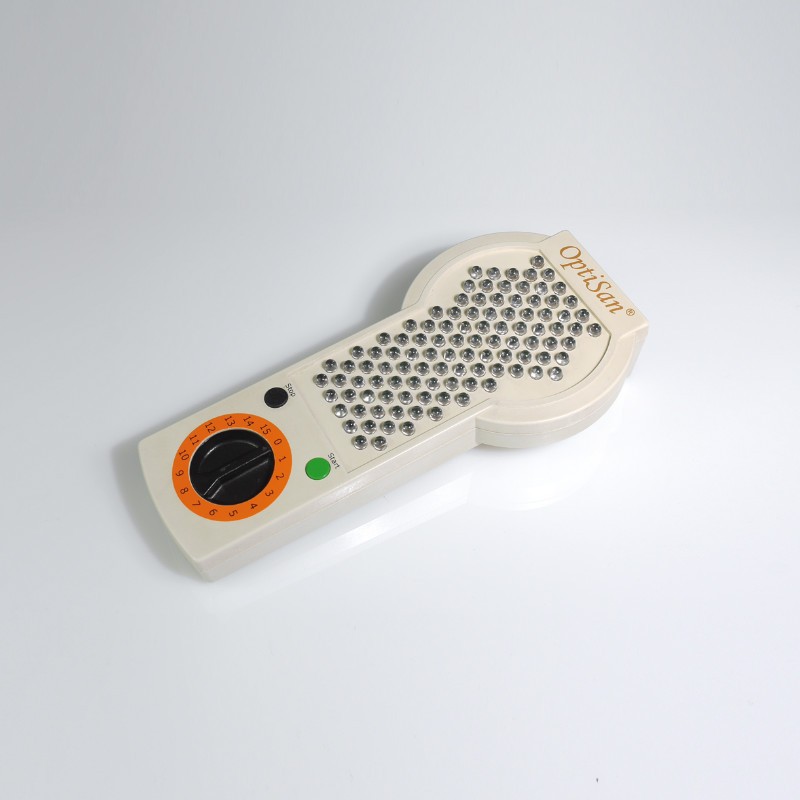 Our first OptiSan was launched in 2003 and proved to be a great success. It could produce infrared light and three visible colours. 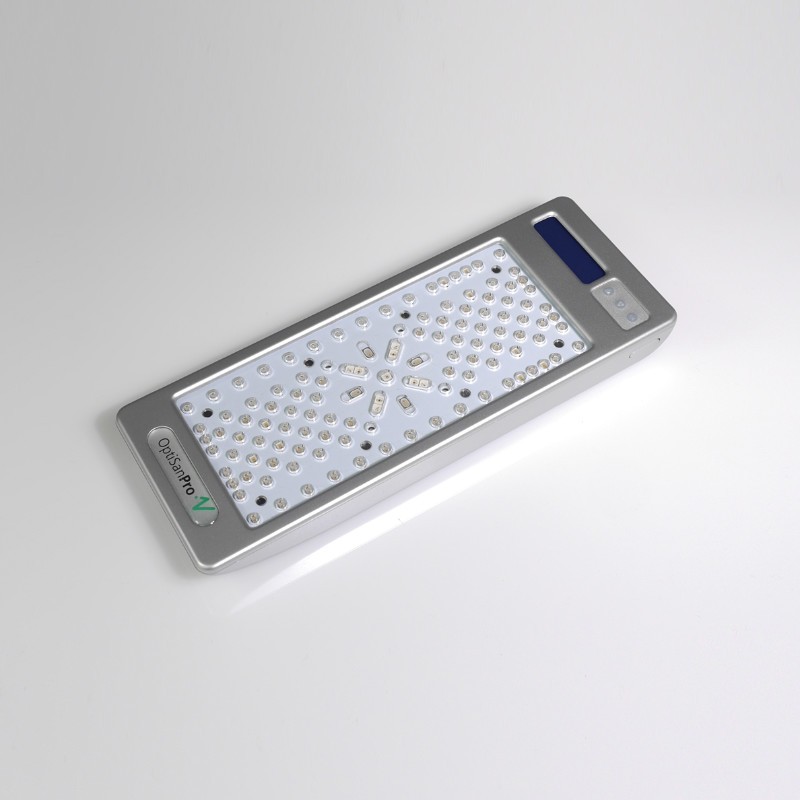 Its successor OptiSanPro from 2012 was already usable wirelessly and offered an incomparable increase in performance. Among other features, it made it possible to apply 7 colours in addition to the infrared light. 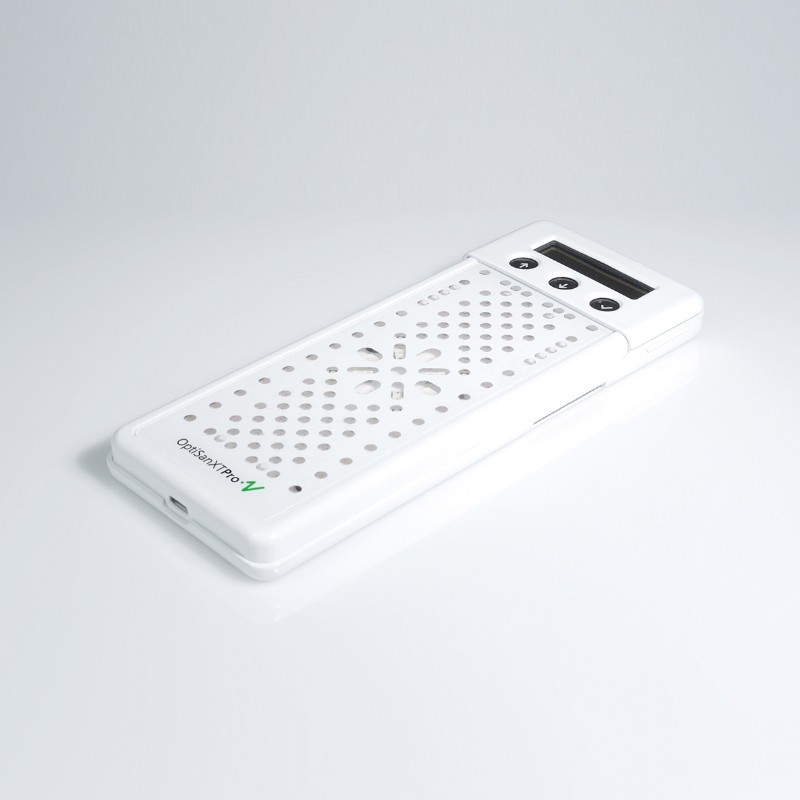 Today, 10 years later, a development - already defined in its framework by Dr. Siegfried Kiontke - has finally been completed. We are proud to be able to present to you the result.

The new housing is custom-made specifically for our device. Thus, all components are firmly secured in their intended place.

The glass surface is firmly integrated into the housing. This helps to improve light diffusion and facilitates cleaning.

The so-called OLED1 display is of the latest generation. This enables a 4-fold higher resolution compared to conventional displays and higher contrasts. This means that the displayed text can be read more easily even in less-than-optimal light.

1 OLED: Organic Light Emitting Diodes. This technology consists of each individual pixel of the display being its own light source. 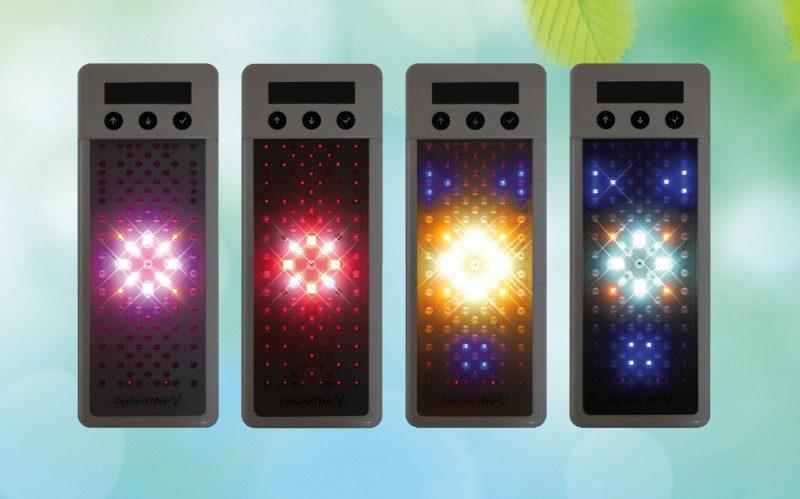 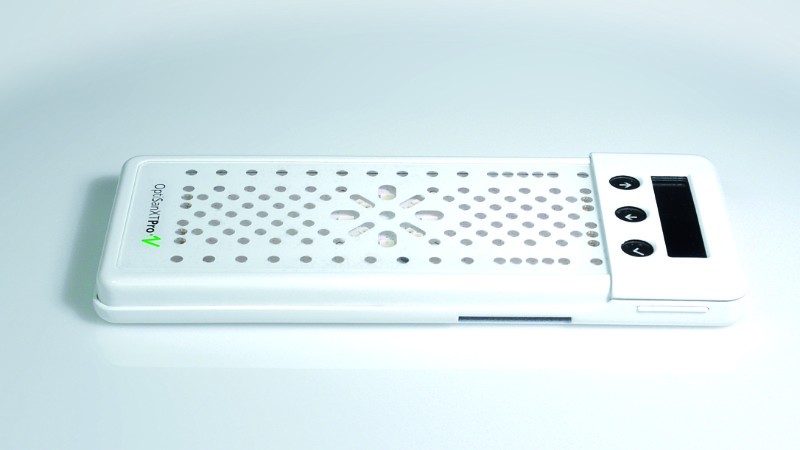 OptiSanXTPro now only has one mechanical key for On, Off, Start and Stop. The selection buttons for Up and Down or OK are now touchless keys with backlighting, noticeably facilitating operation.

All successfully implemented LEDs have been used again. A new addition is an LED that can additionally generate white light. With this extension of the spectrum, all LEDs together now cover the entire frequency spectrum of visible light - including parts of the near infrared light and UV-A light within the permitted limits.

The programme memory has been extended considerably so that future new application programmes can also be stored in it.

Loops are provided on the back of the housing into which retaining straps or similar items can be threaded.

The OptiSanXTPro is charged via a USB-C socket, which makes it more convenient to use. 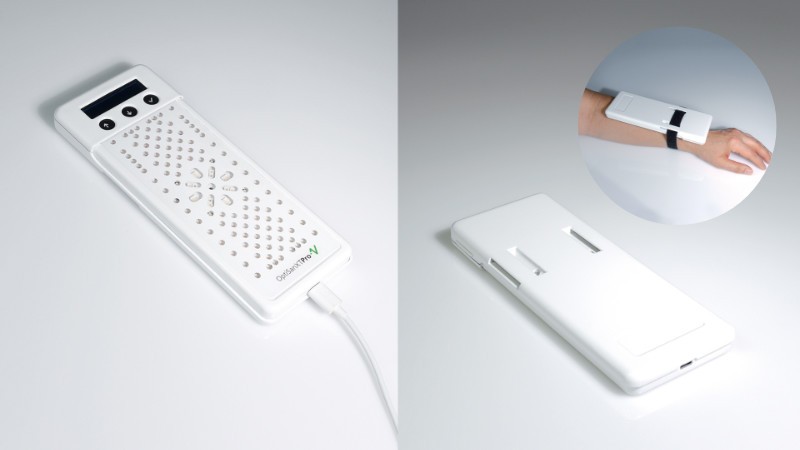 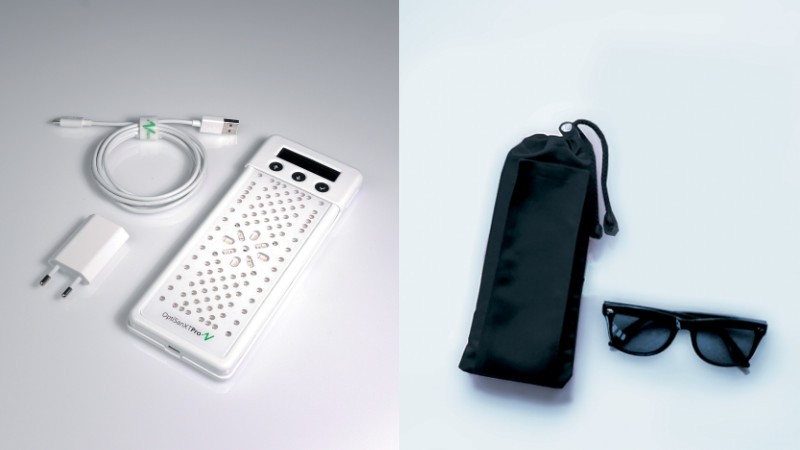 The charging process is 3 times faster than that of the previous model. After approx. 2 hours, the battery is already charged up to 80%, after 4 hours to 100%. If necessary, the device can also be charged via a PC (but this considerably increases the charging time).

The performance of the battery has also been significantly improved. So far, between 30% and 50% longer application times have been observed.

I immediately felt the lymph programme on my body.”

The ’Mitochondria, gentle’ programme woke me up right away.“

Although it feels stronger, I have not observed any initial exacerbations in my chronic cases so far.”

Operation is comfortable because it is similar to other familiar devices.”

I have observed amazingly fast improvement directly after knee injury - both subjectively and visually.”