e-Relief mini replicates some of the most important components of natural ambient radiation in order to generally balance the body's Vitalfeld and thus make it easier for it to deal with technological radiation.

This topic is not only a very important one, but also wide-ranging and publicly discussed (often peppered with misleading or false information). Unfortunately, we cannot deal with it adequately in this framework and will limit ourselves to the basic key data.

Spectrum is the key

Natural ambient radiation ranges from less than 1 Hz to 320 GHz, including infrared radiation, visible and UV light, as well as X-rays and gamma radiation. Our bodies have had eons to adapt to this enormous range and its rhythms.

However, the organism has not only adapted, but has developed important natural processes with high dynamics, bandwidth and rhythmic variety. It therefore perceives them as positive and beneficial - even at higher intensities - and uses them for its survival and regeneration.

Technical radiation, that has been developed for our modern way of life and has become increasingly present in recent decades, pursues completely different goals. It is therefore limited to a considerably smaller frequency range and is so much more intense that it can impair and disrupt our bodily processes right down to the level of our DNA.

It is probably quite unrealistic to stop all technological radiation. The tendency is obviously in the other direction.

Nevertheless, it can be concluded that ambient radiation, that has been created for the body and which simulates natural conditions, can revitalise it and support it in its regeneration.

The more of the natural factors can be recreated simultaneously, the more attractive and easier it is for the Vitalfeld of the cells to regenerate and restore its very own order. It can stabilise and strengthen itself against new disruptive influences.

After the device e-Relief for living spaces was developed for this purpose, a demand  surfaced among users for another device that was small and could be worn on the body at any time. That is why we launched the e-Relief mini in 2019.

e-Relief mini replicates some of the most important components of natural ambient radiation (in a radius of 1 m in all directions). It can generate different broadband signals up to about 1 GHz.

The device thus generates Schumann frequences with the first 11 modes (with which these special frequencies naturally generated in the Earth's atmosphere are well covered), and other frequency patterns, such as fractal frequency spectra, broadband spectra and substance spectra in certain frequency ranges.

Easy to use, self-explanatory

The 24 programmes are self-explanatory and can be selected via the menu.

Simply hang it around your neck or put it in your pocket. 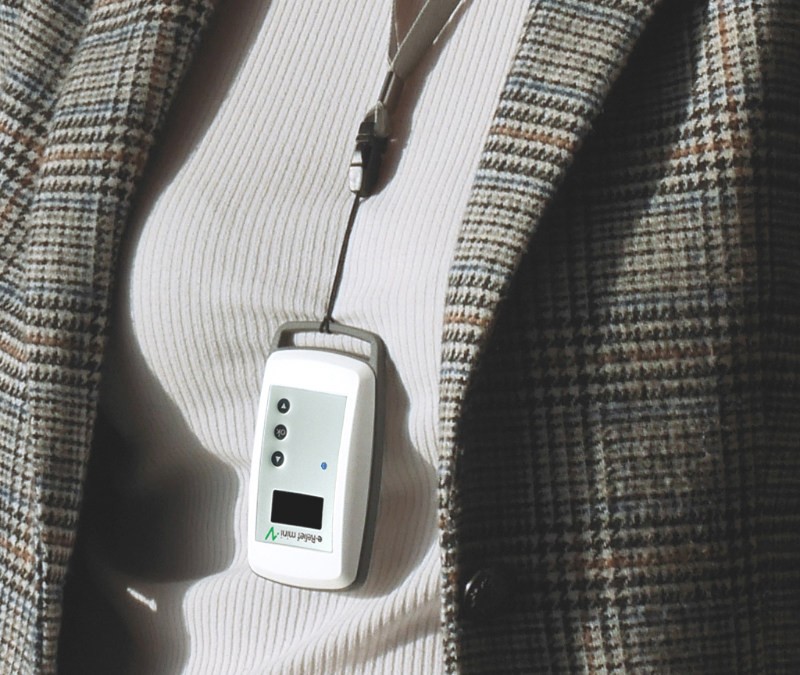 The e-Relief mini is just a blast! I wear it every day for about 6 hours throughout the day. I don't run it at night. Nevertheless, I observe that I sleep much better and deeper. I can't say exactly what it does to my body, but I can clearly say that I feel better, more vital and above all more balanced. It is also interesting how my horse reacts when I wear the device in my trouser pocket. He is somehow more communicative, more attentive to me and loosens up more quickly when I'm riding him, so he can walk in a more relaxed way."

I have been wearing the device on me intermittently but regularly for 2 months. I noticed the first results on my eyes. I needed my reading glasses less often. When I was driving, my choice of programmes was rather random, but I know that there were programmes that had a relaxing effect without disturbing my concentration while driving. On a hike with llamas, I was assigned "Sancho", a very stubborn animal. After I had put the e-Relief mini on its halter, it calmed down and walked beside me like a faithful companion dog. The biggest change I noticed was when I was sleeping. What the device does to you, I don't know ... but it feels like "tidying up". Personally, I think what matters most is personal perception about which programme is good for you."