Already no mystery for a long time

More than 100 years ago it was discovered that every body must be surrounded by fields which are related to the organism. Therefore, in the course of the 20th century, a number of measuring devices were developed to measure and record electric fields generated by the organs, the heart, the muscles, the eyes and the brain.

As early as 1906, the electrical activity of the heart was demonstrated. Today, we owe this fundamental discovery in mature form, for instance, the ECG (electrocardiogram) to measure the heart rhythm.

In the 1930s, pharmacy developed explosively. The "right pill" was developed for every problem.

However, contrary to the mainstream of the time, in 1936 Harold Saxton Burr, American professor of anatomy at Yale Medical University, began a series of studies relating to the body's own fields. He contributed decisively to further research with his findings. Professor Burr also relied on the law of physics, discovered as early as 1820, that any current in an electrical conductor also generates a magnetic field1. In 1963 he demonstrated the existence of this law in the strongly pulsating magnetic field of the heart2.

In 1972, measurements of the much weaker magnetic fields of the brain became possible, which is used today in the EEG (electroencephalogram) to measure brain waves on a daily basis.

Is the Earth Flat?

For a long time, electromagnetic fields of tissues and organs were considered to be a by-product of cellular activity and therefore biologically insignificant. One was mainly concerned with the chemical and thermal influences and changes - without question significant factors.

Now, however, life on earth has developed over many millions of years under the influence of the natural ambient radiation, whereby the sun was and is the main source (but also that part of radiation which is generated within the earth's atmosphere up to the earth's surface itself plays a major role).

If we then take into account the long-established evidence that the body is not only an antenna, but is also a source of low-intensity radiation itself, something is obvious: On the contrary, these fields must be an important part of the communication system in living organisms themselves. The natural conditions and fields have undoubtedly shaped our bodies since the beginning of biological development and have adapted them again and again; evolution continuously works with them and constantly relies on them.

If we summarise these and other research results, it would be illogical to assume that only the measurement of fields of the heart or brain could provide information about the state of the organism. It seems much more plausible to include information from measurable fields of all parts of the body.

Thus, what the foundation stone was laid for more than 100 years ago can be understood and processed at a considerably higher level with the technical possibilities of today. The research results of the last decades cannot be denied. They suggest that at least one control level of the body is electromagnetic in nature - i. e. it works with and via frequencies and fields. We have called this level the Vitalfeld.

The Vitalfeld of a Body - Unique as its Fingerprint 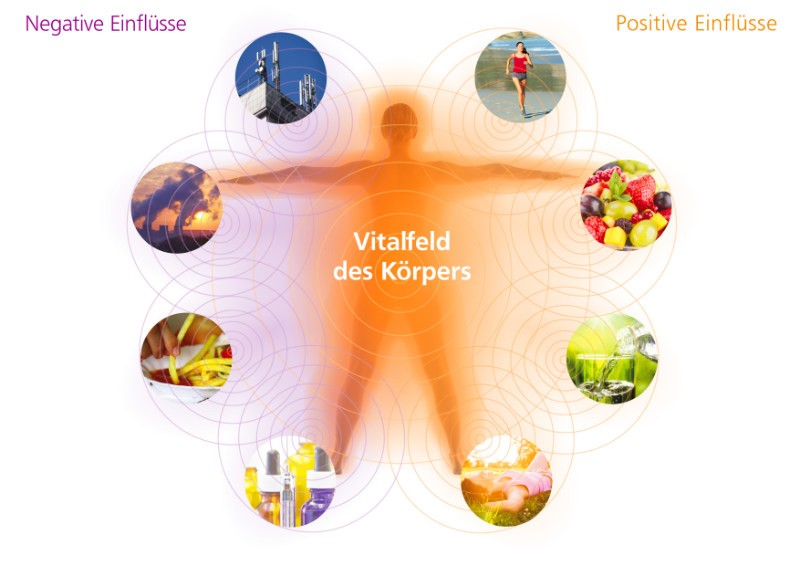 According to current research, the body has a biophysically measurable field that interacts (among other things) with various environmental influences that can have both negative and positive effects.

The Vitalfeld summarises all (electromagnetic) energies that are naturally inherent to the body.

To be more precise: All electric, magnetic and electromagnetic fields that surround and penetrate an organism are collectively referred to as the Vitalfeld. It is in constant interaction with all physiological processes of the body and its environment. Everything in the body is interconnected via the Vitalfeld.

This means that it is not only constantly in motion, but also very individual.

The Vitalfeld is only partially acknowledged or researched by university medicine. In our opinion, it is of decisive importance for the control of all life processes, has an influence on all functions and processes of the body and can therefore not only provide valuable information, but can also be positively influenced.

Our methods are new. All information on the effectiveness of the VitalfeldTechnologie is based on our own observations, investigations and studies over many years, as well as on the practical experience and reports of users. Since university medicine has not made information and energy medicine a subject of its basic research to date, it does not recognise our methods, although they are probably the medicine of the future.

Among the 1,000s of doctors, therapists and other licensed users, it is accepted as a proven method and is used millions of times over.

A Sphere of Interactions

The observations and experiences made by us and by countless users in the course of 25 years of Vitalfeld technology applications confirm the following basic assumptions:

Every healthy organism exhibits certain typical electromagnetic fields, impulse structures and rhythms that extend over a wide range (from less than 1 Hertz to greater than 1,000 Terahertz) and contain a wealth of information.

The deviations in electromagnetic fields occur in frequency, amplitude or phase. Deviations in electromagnetic fields occur even before physiological changes at the functional level of an organism, which means that this information can be regarded as an indicator system for imminent developments of a positive or negative nature and can be used to set the course.

According to our conclusion from the observation of several million measurements with Global Diagnostics, the evaluated information from the Vitalfeld should be included as an early warning system about negative effects and the organism should be supported in restoring its optimal electromagnetic conditions.

The VITATEC devices work on the basis of the VitalfeldTechnologie.